Ok, so my blog entry for this week…  I wanted to write about a timely subject – ah, football.  No, that won’t work, because although I know a lot about football, it is only about one of this year’s Super Bowl teams, and then I would be showing too much bias if I wrote about the Black and Gold.  Ok, so football is out.  Weather and health care are more hot topics, but again my biases might emerge so I decided about the Middle East.   That certainly is a safe subject.

Egyptian literature seemed a good bet so I went with the author Naguib Mahfouz (1911-2006), because I have read him, his writing is very enjoyable, and he is considered Egypt’s first novelist.  His Cairo Trilogy 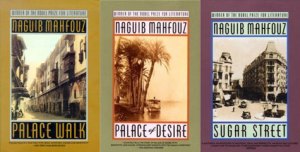 won him the Nobel Prize in Literature.  The titles themselves (Palace Walk, Palace of Desire, and Sugar Street) are lyrical and evocative.  They lead into the stories that follow an Egyptian Muslim family through 3 generations as the country changes at the end of its colonial history starting just after World War I and going through 1944.  The tyrant Al-Sayyid Ahmad Abd al-Jawad oppresses his wife, overly protects his daughters, and has a different but overbearing relationship with each of his sons.  Mahfouz writes about a dying society that still has its hooks in the society of today.  His influence was freeing to many young Egyptian writers but threatening to Islamic militants who tried to stab him to death in 1994.  These books do cover past history, but the issues presented within them resonate today.

“Throughout the trilogy, the family’s trials mirror those of their turbulent country during the years spanning the two World Wars, as change comes to a society that has resisted it for centuries.” (Amazon, Product Description) Women’s rights, politics, and religion are the concerns of the Egyptians as they take to the streets right now.  Mahfouz’s writings conveyed hope for Egypt’s future generations – hope is what is needed there right now.