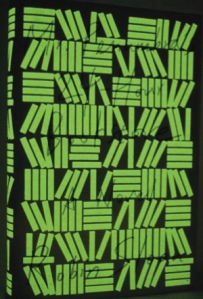 A blog post about a face-to-face book club? This brand of old-meets-new, paper-meets-screen sensibility is perfect for the Brown Baggers latest discussion about Mr. Penumbra’s 24 Hour Bookstore by Robin Sloan. Many of our group members enjoyed this book, a modern fairy tale of sorts. The Brown Baggers, rather a bookish bunch, enjoyed the literary intrigue and focus on the written word. The addition of technology and other modern devices gave this book a fresh feeling.

Some of the details were so fantastical that some readers turned to technology (Google in particular) to confirm whether or not certain references even existed! One topic that came up for discussion was whether or not this new spin on the literary caper would stand the test of time. Despite the high-tech details, most group members felt it would hold up if considered more of a fable or adventure quest rather than a cutting edge story. Even those who weren’t grabbed by the book still appreciated that it was a light, slightly quirky read. It would probably have a lot of appeal to a young adult audience as well. Many Brown Baggers also delightedly commented on the book’s glow-in-the-dark cover. The author notes this feature makes it “something that’s worth buying in its physical edition” — an interesting thought for a digital age.

Want another high-tech tale or bookish read? Try one of these titles available at JMRL: