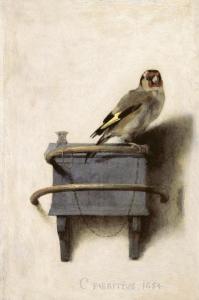 Boasting impressive biceps, the Brown Baggers met in late January to discuss Donna Tartt’s The Goldfinch. Why the newfound upper arm strength? Clocking in at some 700 pages, it took some skill to keep this novel propped up.

While the Brown Baggers aren’t strangers to lengthy tomes (full list of Brown Baggers titles found here), many group members felt this book would have greatly benefited from a stricter editor. The swiftly moving events of the book’s beginning grabbed most members and kept them reading eagerly. By the time Theo arrives in Las Vegas, though, the book began to drag. Most group members felt that this part in particular could have been drastically cut down.

The characters of the book were also a topic of discussion. In line with their feelings about the Vegas section, many readers felt Boris was a strange and alienating character. Others, though, found him humorous and compelling. Most everyone felt a fondness for Hobie, but many noted some of Theo’s odd character traits. The group wondered aloud if it was reasonable for a teenage boy to feel such a strong connection with his mother, even so long after her death.

While opinions were split on the book’s ending as well as the book as a whole, there were not many readers with a middle-of-the-road reaction. The Brown Baggers agreed that this is a polarizing text. Split reactions to Tartt’s Pulitzer Prize win only serve to confirm this.

Join the Brown Baggers on February 19 at noon to discuss The Invention of Wings by Sue Monk Kidd.

Check out Tartt’s other titles, The Little Friend or The Secret History in JMRL’s catalog.

More on the 2014 Pulitzer Prize on their official website here.

A glowing review of The Goldfinch appeared in the New York Times.

One thought on ““Caring too much for objects can destroy you. Only—if you care for a thing enough, it takes on a life of its own, doesn’t it?””