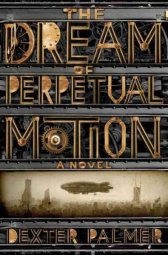 It has been 400 years since the death of William Shakespeare and while the world is a very different place now, it would never be the same without Shakespeare’s classics. You probably know the stories well – now try out one of these adaptations with a modern twist:

The Dream of Perpetual Motion by Dexter Palmer – With his only companions being his insane lover and her cryogenically frozen father, greeting card writer Harold Winslow must come to terms with the madness of a genius inventor and his quest to create a perpetual motion machine. A steampunk retelling of The Tempest.

A Thousand Acres by Jane Smiley – On a prosperous Iowa farm in the 1970s, wealthy farmer Lawrence Cook announces his intentions to divide the farm among his daughters, setting off a family crisis reminiscent of Shakespeare’s King Lear.

The Story of Edgar Sawtelle by David Wroblewski – A Hamlet-style tale that also celebrates the ancient alliance between humans and dogs follows the coming-of-age of speech-disabled Wisconsin youth Edgar, who bonds with three yearling canines and struggles to prove that his sinister uncle is responsible for his father’s death.

Warm Bodies by Isaac Marion – Alienated from his fellow zombies because of his dislike of having to kill humans and his enjoyment of Sinatra music, “R” meets a living girl who sharply contrasts with his cold and dreary world and who he resolves to protect in spite of her delicious appearance. An undead adaptation of Romeo & Juliet.

Confessions of a Triple Shot Betty by Jody Gehrman – While working at the Triple Shot Betty during summer break, Geena’s great plans are ruined when her best friend and cousin meet and instantly hate one another, but as the weeks go on and endless dramas unfold, the three finally put their silly differences aside in order to have great group adventures that no one will ever forget. A new spin on Shakespeare’s Much Ado About Nothing.

Vinegar Girl by Anne Tyler – A modern retelling of The Taming of the Shrew follows the experiences of a preschool teacher who alienates others by speaking her mind and who is expected by her eccentric father to marry his assistant to prevent the young man’s deportation.

Love in Idleness by Amanda Craig – Casa Luna in Tuscany becomes the scene for a family vacation that forces each traveler to discover significant differences in himself or herself, in a modern-day story of love and lies based on Shakespeare’s A Midsummer Night’s Dream.