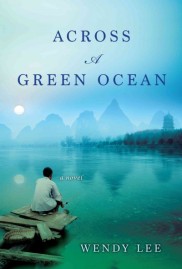 Every family has something to hide. Family secrets can be the juiciest, but also the most devastating. The truth finally comes out in these novels about fictional families and their hidden demons. Stop by the library sometime to pick one up.

Across a Green Ocean by Wendy Lee – After his father’s death, Michael Tang finds a letter sent to his dad from a long-ago friend in China. Without a word to his mother or sister, he decides to make the long journey to a remote part of that enormous country. Once there, he begins to learn about the man his father once was, and how long-ago choices continue to echo throughout all of their lives.

Leaving Time by Jodi Picoult – Abandoned by a grief-stricken father and accomplished-scientist mother who disappeared under mysterious circumstances, 13-year-old Jenna Metcalf approaches a disgraced psychic and a jaded detective in the hopes of finding answers.

The Book of Speculation by Erika Swyler – Simon Watson, a young librarian on the verge of losing his job, finds a mysterious book that holds the key to a curse that has haunted a family of traveling circus performers for generations.

Black Rabbit Hall by Eve Chase – Planning her wedding at her family’s haunting, timeless London country estate, Lorna recalls half-buried memories of her mother before uncovering the manor’s labyrinthine history and becoming obsessed with a need for answers.

The Truth According to Us by Annie Barrows – Refusing to marry according to her senator father’s wishes before taking a job with the Federal Writer’s Project, Miss Layla Beck boards with an eccentric family in a backwater town before discovering long-kept secrets.

The Past by Tessa Hadley – Assembling at their Somerset country house one final time before it is sold, four siblings and their children share past memories, hidden passions, and devastating secrets that threaten to overwhelm them.

Middlesex by Jeffrey Eugenides – Calliope’s friendship with a classmate and her sense of identity are compromised by the adolescent discovery that she is a hermaphrodite, a situation with roots in her grandparent’s desperate struggle for survival in the 1920s.