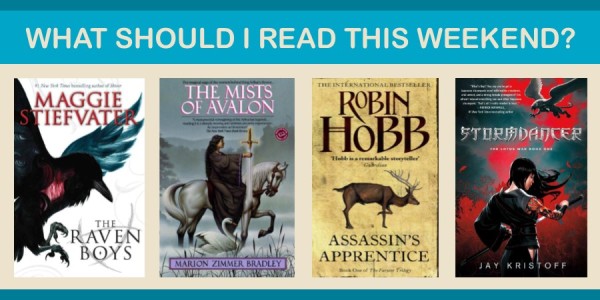 It feels like summer, so our thoughts turn to… escape! Here are a few fantasy titles to help you make your way to worlds that are not “hot and humid with a chance of thunderstorms” every day (although the first recommendation does take place in Virginia). Enjoy!

The Raven Boys by Maggie Stiefvater – I just finished the fourth (and final) book in the Raven Cycle and it is awesome!  It’s been a pleasure to watch Stiefvater mature over the course of her career. The Wolves of Mercy Falls series (werewolves in love!) was excellent and she snuck in The Scorpio Races, a fine stand-alone, in the middle of it. The Raven Cycle follows a group of boys in a fancy private school, somewhere in central Virginia, who are searching for the body of a mythical Welsh king. Local (not-so-privileged) girl, Blue, lives in a house full of women who are all psychics, although she has different abilities of her own. Now that the series is complete, you can start with Raven Boys and read them straight through. Great characters, fast cars, an assassin, dream thieves and ghosts – an awesome ride! And if you see Stiefvater around town (she lives in Harrisonburg), be sure to say “Hey!”

The Mists of Avalon by Marion Zimmer Bradley – A classic retelling of the Arthurian legend, from the women’s point of view. Camelot is caught up in the struggle between the Old Religion and the newcomer Christianity, as the world changes under King Arthur’s rule. Written in 1979, The Mists of Avalon has certainly withstood the test of time. In the 1990’s, Bradley came back with a prequel (followed by 6 more) if you’re interested in more of the Old Ways. At well over 800 pages, though, The Mists of Avalon is complete in itself.  A must read!

Assassin’s Apprentice by Robin Hobb – The first book in the first trilogy introduces us to Fitz, a bastard son of Prince Chivalry. His royal blood gives him the Farseer magic – the ability to communicate over distances with his kinsmen – but he also carries the ‘lesser’ magic, which is the ability to communicate with animals. This one is frowned upon and quite often beaten out of children who exhibit it. Fitz will be trained up as an assassin for his King, as all royal bastards have been for generations. Hobb has created a well-appointed land full of wonderful characters and believable storylines. With five trilogies set in the same world, you can keep on going because you’re sure to be hooked!

Stormdancer by Jay Kristoff – Again the first in a trilogy (The Lotus War), but this one is set in a futuristic, steampunk, feudal Japan. The Shima Imperium is an ecological mess, run by the Lotus Guild, with skies as red as blood and toxic pollution everywhere. In order to prove his power, the Shogun charges his Imperial Hunters to capture a legendary Thunder Tiger – half tiger, half eagle – even though everyone knows the creatures are extinct. Failure to find one means certain death for the hunters. Our heroine, Yukiko, a daughter of the Fox Clan, accompanies her father on the Hunt, only to find herself stranded in the last wilderness in Shima. Since there’s a picture of a Thunder Tiger on the cover of the book, I don’t have to tell you where the story goes.

Bookmobile Supervisor "The best job in the library!"
View all posts by bookdragon →