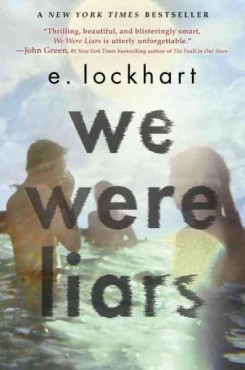 Now that summer is here, it’s time to get ready for longer days, warm weather and beachy getaways. If you’re looking for something literary to get you into the spirit of summer, try one of these novels available at the library:

We Were Liars by E. Lockhart – Spending the summers on her family’s private island off the coast of Massachusetts with her cousins and a special boy named Gat, teenaged Cadence struggles to remember what happened during her fifteenth summer.

The Last Bus to Wisdom by Ivan Doig – Rejected by his domineering great-aunt during the summer of 1951, imaginative 11-year-old Donal travels back to his ailing grandmother’s home accompanied by his German great-uncle while experiencing haphazard adventures along the way.

A Bed of Scorpions by Judith Flanders – After an art dealer is found dead in his gallery, book editor Samantha Clair is caught between loyalties to her new boyfriend, police inspector Jake Field, and her ex-boyfriend, the deceased’s art-dealing partner, and must put on her amateur sleuthing cap if she is ever going to find the murderer.

Beautiful Ruins by Jess Walter – Follows a young Italian innkeeper and his almost-love affair with a beautiful American starlet, which draws him into a glittering world filled with unforgettable characters.

Sag Harbor by Colston Whitehead – Benji, one of the only black kids at an elite prep school in Manhattan, tries desperately during the school year to find a social group that will accept him, but every summer, he and his brother, Reggie, escape to the East End of Sag Harbor, where a small community of African-American professionals has built a world of its own, in a funny coming-of-age novel that explores racial and class identity.

The Weekenders by Mary Kay Andrews – Served with papers that her much-loved island home on idyllic Belle Isle is being foreclosed and that her husband has abandoned her, Riley turns to her friends for help, who she discovers are harboring their own secrets.

Hour of the Bees by Lindsay Eager – At first, 12-year-old Carol is not happy to be spending the summer helping her parents move her grandfather to an assisted living home, but as the summer wears on, she finds herself drawn to him, fascinated by his amazing stories.

The Past by Tessa Hadley – Assembling at their country house one final time before it is sold, four siblings and their children share past memories, hidden passions and devastating secrets that threaten to overwhelm them.

One thought on “Stories of Summer”