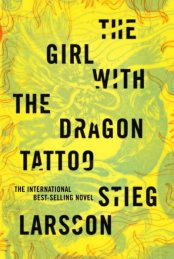 These mysteries are colder than the weather outside. If you’re an avid reader of detective fiction or murder mysteries, check out one of these novels and see if you can solve the cold case before the culprit is revealed:

The Girl With the Dragon Tattoo by Stieg Larsson – Forty years after the disappearance of Harriet Vanger from the secluded island owned and inhabited by the powerful Vanger family, her octogenarian uncle hires journalist Mikael Blomqvist and Lisbeth Salander, an unconventional young hacker, to investigate.

The Bitter Season by Tami Hoag – While Nikki spends time with her family and misses more satisfying work with her former partner, Sam struggles with a rookie new partner and investigates a double homicide before unexpectedly teaming up with Nikki to stop a threat against a former foster child.

The Paris Librarian: A Hugo Marston Novel by Mark Pryor – When his friend dies mysteriously in the American Library in Paris, Hugo Marston investigates and must return to the scene of a decades-old crime involving an American actress who was rumored to have killed an SS officer in 1944.

Stay Close by Harlan Coben – A bored suburban wife, a documentary photographer-turned-paparazzo and a detective who cannot let go of a cold case hide secrets from their loved ones only to have the past return in dangerous ways.

The Keeper of Lost Causes by Jussi Adler-Olsen – Chief Detective Carl Morck, recovering from what he thought was a career-destroying gunshot wound, is relegated to cold cases and becomes immersed in the five-year disappearance of a politician.

The Cinderella Murder: An Under Suspicion Novel by Mary Higgins Clark & Alafair Burke – In her new reality television series that explores unsolved crimes, Laurie Moran brings together the friends and family of a murdered UCLA student to see what new evidence from the cold case comes to light.

Identical by Scott Turow – A mayoral candidate’s brother is released from prison twenty-five years after pleading guilty to the murder of his girlfriend, a situation that leads to the re-opening of the case.

The Lake House by Kate Morton – Decades after Alice’s little brother goes missing during a Midsummer’s Eve party, a young London policewoman sets off a series of events that reveal shocking truths.