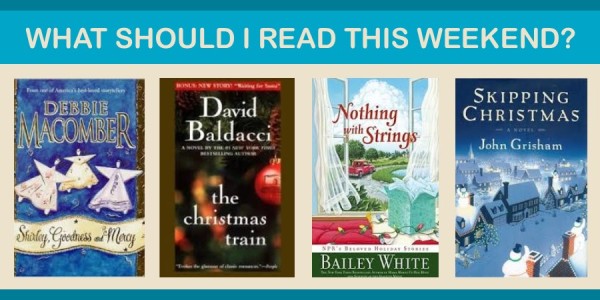 November has come and gone, the leftovers are finished, and decorating has begun – it must be December!   Many of us are starting to think of Christmas and luckily there are plenty of books to get us in the mood.  There are any number of authors who faithfully write a small (and most of them seem to be small) Christmas story each year.  Mary Higgins Clark with her daughter Carol Higgins Clark and Anne Perry can be counted on for Christmas mysteries that do not necessarily feature their regular protagonists.  If you’re in the mood for a western holiday romance, both Janet Dailey and Linda Lael Miller have several.  Debbie Macomber has a series of Christmas books featuring the angels Shirley, Goodness, and Mercy and Thomas Kinkade has a number of nice holiday tales that take place in the fictional town of Cape Light.  Richard Paul Evans rose to fame with The Christmas Box and has since continued his Christmas chronicles.

Many of our favorite authors have Christmas stories that are part of their regular series – Jacqueline Winspear’s Maisie Dobbs, Margaret Maron’s Deborah Knott,  and Joanne Fluke’s Hannah Swensen, to name a few.   Jan Karon’s Mitford series includes Shepherds Abiding – be sure to check the acknowledgement to local artist Stefanie Newman, who restored the actual Nativity figures for the story.

Garrison Keillor’s A Christmas Blizzard, John Grisham’s Skipping Christmas, and David Baldacci’s The Christmas Train, all from excellent storytellers, add humor, mystery or adventure to the mix.  Bailey White, of NPR fame, offers a lovely collection of stories in Nothing With Strings.

Christmas at the Mysterious Bookshop, edited by Otto Penzler, is unusual.  Mr. Penzler is the founder and proprietor of The Mysterious Bookshop in New York City, described by Wikipedia as “one of the oldest and largest mystery specialist bookstores in the world.”  Each year, Mr. Penzler would commission a Christmas story, set in the bookstore, from a leading mystery writer.  These stories were printed as pamphlets and given to his regular customers.  In 2010, he collected 17 of them and published them in book format.  The authors include Lawrence Block, S.J. Rozan, Anne Perry, Mary Higgins Clark, Ed McBain, and others!

For the whole family, read The Best Christmas Pageant Ever by Barbara Robinson, a true classic that reminds us of the real spirit of the holiday.  It’s usually performed as a play by one of the local theater groups or schools around this time of year.  The Nativity, with words from the King James Bible and beautiful illustrations by Julie Vivas, brings the age-old tale to human proportions.

So whether you re-read your old favorites or try something new, I wish you all a joyful, peace-filled holiday season!

Bookmobile Supervisor "The best job in the library!"
View all posts by bookdragon →