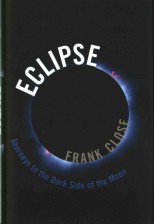 For the first time since 1979, many Americans will soon be able to experience a total solar eclipse. Lasting no more than a few minutes on August 21, this spectacular phenomenon will be viewable roughly between 2:30 and 3 p.m. here in Virginia. Read more about the history and science behind solar eclipses by checking out one of these books from the library:

Eclipse: Journeys to the Dark Side of the Moon by Frank Close – Looks at the science of eclipses, reveals their role in culture, and focuses on people who travel around the world chasing these events.

American Eclipse: A Nation’s Epic Race to Catch the Shadow of the Moon and Win the Glory of the World by David Baron – Documents the efforts of three scientists to observe the rare total solar eclipse of 1878, citing how the ambitions of James Craig Watson, Maria Mitchell, and Thomas Edison helped America’s early pursuits as a scientific superpower.

Astrophysics for People in a Hurry by Neil deGrasse Tyson – Offers witty, digestible explanations of topics in cosmology, from the Big Bang and black holes to quantum mechanics and the search for life in the universe.

In the Shadow of the Moon: The Science, Magic, and Mystery of Solar Eclipses by Anthony Aveni – In anticipation of solar eclipses visible in 2017 and 2024, an exploration of the scientific and cultural significance of this mesmerizing cosmic display.

Sun, Moon, Earth: The History of Solar Eclipses, From Omens of Doom to Einstein and Exoplanets by Tyler E. Nordgren – Ahead of the first total eclipse of the sun in 40 years, an astronomer describes how solar eclipses were treated and interpreted by past civilizations, philosophers and Victorian scientists.

Mask of the Sun: The Science, History, and Forgotten Lore of Eclipses by John Dvorak – Reveals the humanism behind the science of both lunar and solar eclipses.

The New Cosmos: Answering Astronomy’s Big Questions by David J. Eicher – A fascinating and spectacular exploration of the cosmos that provides readers with a definitive view of the latest discoveries.