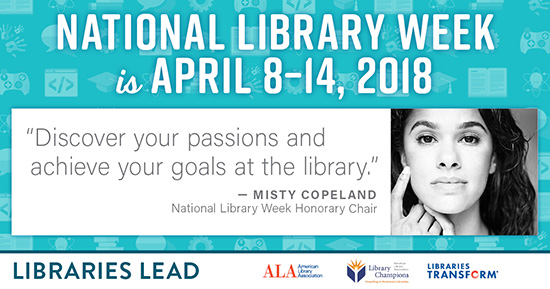 It’s National Library Week! What better way to celebrate the library than by reading about libraries and librarians all over the world? Here’s a compilation of books that revolve around libraries and the people who work within them:

This Book is Overdue! by Marilyn Johnson – In a celebration of libraries and the dedicated people who staff them, the author argues that librarians are more important than ever, and discusses a new breed of visionary professionals who use the web to link people and information.

The Invisible Library by Genevieve Cogman – An undercover librarian who works for an occult organization that collects books from different realities must determine what happened to a particularly dangerous book that has been stolen and becomes mired in a mystery infused with peril and conflicting clues.

Dewey: The Small-Town Library Cat Who Touched the World by Vicki Myron – Traces the author’s discovery of a half-frozen kitten in the drop box of her small-community Iowa library and the feline’s development into an affable library mascot whose intuitive nature prompted hundreds of abiding friendships.

The Borrower by Rebecca Makkai – When her favorite patron, a book-loving 10-year-old, runs away from overbearing parents who force him to attend anti-gay classes with a celebrity pastor, children’s librarian Lucy Hull flees with the boy and discovers that they are being pursued by an anonymous adversary.

The World’s Strongest Librarian by Josh Hanagarne – Traces the public librarian author’s inspiring story as a Mormon youth with Tourette’s Syndrome who after a sequence of radical and ineffective treatments overcame nightmarish tics through education, military service and strength training.

Bibliotech by John G. Palfrey – Citing the cultural role of libraries as facilitators of information, argues for the importance of transitioning the works contained in libraries into accessible digital formats that can preserve functions and provide for evolving needs.

The Bad-Ass Librarians of Timbuktu by Joshua Hammer – Describes how a group of Timbuktu librarians enacted a daring plan to smuggle the city’s great collection of rare Islamic manuscripts away from the threat of destruction at the hands of Al Qaeda militants to the safety of southern Mali.