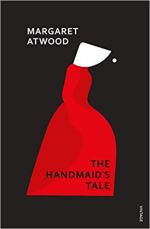 The Brown Baggers gathered on September 20 to discuss The Handmaid’s Tale by award-winning author Margaret Atwood just in time for Banned Books Week. According to the American Library Association, The Handmaid’s Tale has been one of the “100 Most Frequently Challenged Books” since 1990.

The novel is told by Offred- her real name is unknown. She is a Handmaid in the Republic of Gilead, a totalitarian state that has replaced the United States of America. In this future there are dangerously low reproduction rates, so Handmaids are assigned to bear children for elite couples that can’t conceive. Offred’s freedom, and the freedom of all women, is completely restricted- women aren’t allowed to have jobs, own property, or have money. Offred tells the story of her life, sometimes through flashbacks.

The Brown Baggers loved this dystopian novel- and also hated it. The group was divided on the book- some thought it was thought-provoking and really enjoyed how the messages in the book were portrayed. But others found it difficult to read and even upsetting.

Some readers mentioned that the caste system in Gilead was similar to other caste systems (past and present) around the world. Colors were referenced throughout the novel, and readers quickly picked up on the meanings of colors that the women in the book were forced to wear. Some also mentioned that there was a lot of reporting and spying on neighbors depicted in the novel and thought this was very reminiscent of Nazi Germany.

Most Brown Baggers agreed that they like the character Moira- who was Offred’s best friend and had a fiery, strong personality, and it was sad that we did not find out her fate. Other readers did not like the ending of the book because it was so ambiguous, but some didn’t mind this. Overall, most felt that the book was interesting and made for a great discussion!

The Brown Baggers will discuss H is for Hawk on October 18 at 12pm.

More Information:
Article about Atwood from the New Yorker
Review from the Washington Post (from 1986)