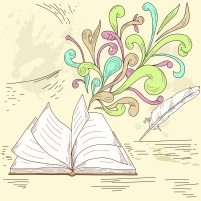 Pop into your local library and be inspired for National Poetry Month!

Attendees at any of the Jefferson-Madison Regional Library (JMRL) branches can grab a poem scroll on Thursday, April 25 as part of the annual Poem in Your Pocket Day.

In addition to handing out poems within the library, staff will also be out and about at locations throughout the community, including the Downtown Mall and on the lawn.

But the fun doesn’t stop there…JMRL will also be hosting Poetry on the Steps at 7pm at Central Library on April 25! This is an open mic event, so stop by to share an original poem, read your favorite poem, or just sit back and enjoy.

Both events are sponsored by the Friends of the Jefferson-Madison Regional Library, with WriterHouse serving as a co-sponsor of the Adult Poetry Contest. This year’s finalist judge is Virginia’s Poet Laureate Henry Hart.

If you’re looking to brush up on some award-winning poetry, check out a list of Pulitzer Prize winners located on the JMRL website. Some examples include:

Half-Light: Collected Poems 1965-2016
By Bidart, Frank
The collected works of one of contemporary poetry’s most original voices. Gathered together, the poems of Frank Bidart perform one of the most remarkable transmutations of the body into language in contemporary literature.

Olio
By Jess, Tyehimba
Named a top poetry book of spring 2016 by Library Journal. Part fact, part fiction, Tyehimba Jess’s much anticipated second book weaves sonnet, song, and narrative to examine the lives of mostly unrecorded African American performers directly before and after the Civil War up to World War I.

Ozone Journal
By Balakian, Peter
The title poem of Peter Balakian’s Ozone Journal is a sequence of fifty-four short sections, each a poem in itself, recounting the speaker’s memory of excavating the bones of Armenian genocide victims in the Syrian desert with a crew of television journalists in 2009.

For more information about upcoming events and services, visit http://www.jmrl.org.