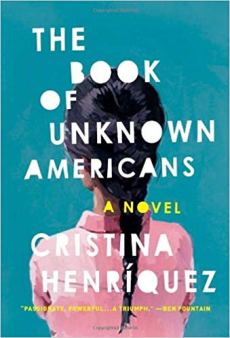 Books on Tap read The Book of Unknown Americans  by Cristina Henriquez at Champion Brewery on May 2. The novel is set in an apartment building in Delaware owned and occupied by Latinx migrants. It frequently switches narrators but the story focuses on the Riveras, a family that has moved to America to access school services for their teen daughter Mirabel who has suffered a brain injury, and the Toros, Panamanians who are now American citizens. Teenage Mayor Toro is drawn to Mirabel and Celia Rivera helps newly arrived Alma Rivera navigate life in small town Delaware. The teen protagonists and straightforward prose would appeal to teen readers. Henriquez is also a short story writer and the interstitial chapters narrated by secondary characters who live in the building read like short stories. The entire story was originally written from Mayor’s point of view and he and Alma really carry the novel.

The book is set during the global economic crisis of 2008 and written around 2012. We thought that the Riveras would have a harder time getting visas from Mexico today then they would have then. The neighbors all share their compelling reasons for migrating and we think they would be in even more danger now. While we were surprised that the characters migrated to Delaware, Henriquez does a good job of explaining why and how they landed there. We compared it to our local economy that visibly employs migrants in such businesses as food service, construction, wine and orchard agriculture.

The secondary neighbor’s chapters painted a complex picture of the Latinx community, highlighting commonalities and differences, brought to life by busybody neighbor Quisqueya. However, we would have liked to learn more about food culture and had more distinction in speech among the migrants and even more untranslated Spanish. The only character not to get his own chapter was Garrett, the white teenager who harasses the Riveras and is instrumental to the climax. We inferred that his home life was terrible but he remains as remote to us as he was to Alma.

The climax is an unexpected but not unearned surprise. The Riveras have already survived the tragedy of Mirabel’s accident and her father’s unemployment. This last disaster makes Alma’s decision to return to Mexico inevitable but turns the focus from migration to a universal reflection on guilt and forgiveness.

More Information:
About the author
About the book
Other works

Have a suggestion for future titles? Add them to this list.
Previous titles

Posted in Books on Tap