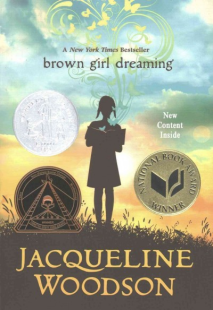 The Brown Baggers met on Thursday, March 12, to discuss Jacqueline Woodson’s book, Brown Girl Dreaming.  Woodson’s memoir in verse chronicles growing up from Ohio, to South Carolina, and finally home in Brooklyn throughout the volatile racial and class tensions of the 1960’s.

Told in verse in a series of vivid snapshots, Woodson’s book tells the story of her birth in Ohio, and then her move to South Carolina where she spent much of her childhood living with her siblings under the care of her grandparents. She grows up with segregation, religion, and violence, but also a strong sense of family and a love of place. Finally, she tells of her family move to Brooklyn, which brings its own kinds of gains and losses.

The Brown Baggers had a lively discussion about both the themes and technique of the book. All were very impressed by Woodson’s ability to fill even the sparse text used with imagery and feeling, praising her use of verbs. Some found difficulty grappling with the experience of an ongoing story told in verse format, while others found this refreshing and useful once they became accustomed to it. It was suggested that the audiobook, which is read by the author, might improve the experience.

Many Brown Baggers were pleased to find commonalities in Woodson’s life with their own, despite varied experiences. The ideas of community and family featured heavily in the book, along with migration. Even though not everyone had the same sort of lives, many empathized with Woodson’s experiences gaining and keeping friendships as she grew up, and the powerful feelings which accompany them.

Woodson’s work brought up thoughts and comparisons on diversity in religion, personal experience with not fitting in, and at what age certain topics and experiences are common.

The Brown Baggers agreed that they enjoyed the book and conversation immensely, especially as a Same Page pick, and were interested in looking at more of Woodson’s work in the future.

The Brown Baggers will discuss Convenience Store Woman by Sayaka Murata at our next meeting. During the current closure, the dates have not yet been finalized. When the meeting happens, it will be at the Central Branch, and newcomers are always welcome.