The Brown Baggers met on August 16 to discuss Lisa See’s The Tea Girl of Hummingbird Lane.

The story takes place in the mountains of China. Li-yan, a young girl of the Akha ethnic minority group, lives with her family picking tea leaves and following the customs of her culture. Li-yan is smart and is able to continue her schooling beyond what is typical for someone in her village. When a stranger visits the village in a jeep, the first automobile any of them had seen, Li-yan acts as a translator and begins to understand that there is a world far beyond her own and that she doesn’t have to stay in her village forever.

In Li-yan’s teenage years she falls in love with a young man who is not considered an appropriate match by her mother, but Li-yan bears his child, then takes the baby to an orphanage in the city, leaving the infant with a special tea cake. Li-yan eventually makes a life for herself outside of her small village, through owning a tea shop that sells pu-erh tea, but she never forgets the child she gave up.

Almost all of the Brown Baggers loved this book! They thought the story was interesting and loved learning more about the Akha people and about how tea is grown and processed. Some noted that although the novel had many characters, it was a plot-driven novel, rather than character-driven, which made the story move quickly.

Some readers mentioned that they thought there were too many details about tea. Although the book centered around the unique tea culture, there was a lot of information about the price of different tea leaves and this seemed to distract from the plot of the story. But others mentioned how much research the author must have completed around the topic.

Many readers felt that it was interesting to learn about the superstitions of the Akha culture and how they were different (and similar) to superstitions from other parts of the world. The Akha had the saying “no coincidence, no story,” but some Brown Baggers pointed out that there were many, many coincidences in the book. Also, most felt that the ending was too contrived, but they still enjoyed it. Others felt like the ambiguous ending was disappointing, but in an interview, the author said that she purposefully wrote the ending this way.

The Brown Baggers will meet again on September 20th at 12pm and will be discussing The Handmaid’s Tale by Margaret Atwood.

More Information:
Article about Pu-erh tea
About the Akha People

Reviews of the Book:
From Kirkus Reviews
From the Washington Post
From the Los Angeles Review of Books

Books on Tap read Dept. of Speculation by Jenny Offill at Champion Brewery on August 2. The novel, short on plot but long on introspection, follows a writer who hopes to be an “art monster” as she marries, has a daughter, teaches writing in college and negotiates her marriage after her husband’s infidelity. Told in short bursts, it has been likened to an x-ray, drawing on the author’s experimentation with poetry during a bout of writer’s block. It starts in close first person, switches to third person after the cheating is discovered and then back to first as the husband and wife reconcile.

We all liked this witty rumination on growing older, knowing oneself and making compromises. Two of us listened to the audiobook and missed all the formatting (and thought we had missed entire chapters!). We didn’t think that the characters were particularly sympathetic but the narrator’s emotions resonated. Her desire not to lose her identity and drive after childbirth and her questioning of priorities accurately reflects life in middle age. However, the point of view is so narrow, it only serves to confirm that you can never truly know what happens in another couple’s relationship. The book contains all aspects of a full life: family, career, loneliness, romance, anger. Its format also mirrors how we communicate now, inward-turning short bursts with (inaccurate?) quotations of famous people. While the ending wasn’t particularly happy, it was happier and happy enough. 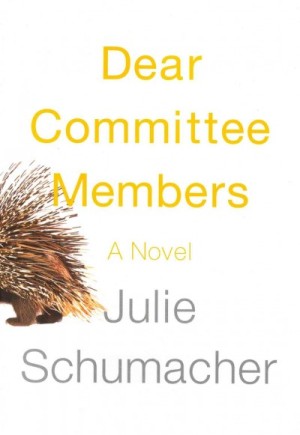 Books on Tap read Dear Committee Members by Julie Schumacher for the July 5 discussion at Champion Brewery. Not only is it an epistolary novel, it is comprised solely of letters of recommendation from English professor Jason Fitger. Fitger, battling the college’s administration, construction crews, his colleagues, peers and students. Rarely are the letters positive and even more rarely are they effective. However, they are always funny.

Fitger had early success with a roman a clef about his time in high-pressure graduate writing program (The Group) but his later novels were met with poor sales and even poorer reviews. His ex-wife and girlfriend both work on campus and have aligned against him. The English department is a toxic hazard zone due to building construction and has next to no funding, meaning his one promising student may never finish his stunning revision of Bartleby the Scrivener set in a Las Vegas bordello. Against this backdrop of strife, Fitger emerges as a cynical, egotistical man who nonetheless defends the humanities and his best students with all the institutional power he has left.

We were surprised that the book, while gimmicky, was grounded and that Schumacher cleverly developed Fitger’s character and motivation. We all came up with a clear mental image of Fitger or his office and college. She also nailed the intra-department rivalries in academia. She also highlights the ways that liberal arts are losing funding and focus to STEM programs. Fitger defends a brilliant Slavic scholar who has lost his funding by asking “Where else can he go?”. While he rails against the ways that his college, and academia in general, doesn’t support the English department, he doesn’t offer quite enough support to the younger adjuncts who have to string together a career with multiple low-paying postings at multiple colleges.

The novel questions the role of mentorship. Fitger was the favorite of the charismatic leader of The Group and it was under his auspices that Fitger’s first novel was shaped and published. However, this favoritism and the way Fitger portrayed his fellow students in print alienated him from his peers. This alienation has consequences decades later. The women in the group refuse to support Fitger and the most talented member of their cohort cannot get published after retreating from writing due to personal tragedy. Fitger’s own mentorship of his students his suspect, as well. He’ll write almost any one a letter of recommendation, but often these are not actually helpful. Darren, the student he most wants to succeed, seems more like a reflection of Fitger himself.  Darren’s suicide was a plot point we agreed didn’t resonate. Due to its format, the book can only develop Fitger’s character, which meant that this cathartic moment fell flat.

Finally, we discussed aging. Fitger’s self-confidence seems to mask his feeling of failure. His later books were flops and we thought that he doesn’t have another one in him, which did make  his mentorship of Darren bittersweet. His love life doesn’t look like it can recover from its latest self-inflicted wound and has alienated many of his colleagues. In the end, it’s his tenured job and love of humanities that keeps him fighting the good fight via all those letters of recommendation.

Other formats may be available