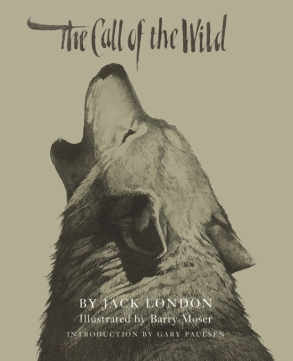 Books on Tap read The Call of the Wild  (other editions available) by Jack London at  Champion Brewery on January 4. It was the perfect chilly night to discuss a book set in the Yukon. A short, spirited classic about the conversion of a pet dog into a wild, independent creature, it was either a re-read or vaguely familiar to all participants. In it, Buck, a large pet dog, is stolen and sold away from a California ranch to traders in Canada during the gold rush. Beaten into submission, he quickly adapts and then thrives as a sled dog. Eventually, he becomes fully feral and a legend in the woods. Inspired by London’s participation in the Klondike Gold Rush, the story was originally serialized in the Saturday Evening Post and built on his earlier success with The Son of the Wolf.

The novel is told from Buck’s perspective, if not in his voice (see the title of this blog for a possible reason why). This choice by London intensifies Buck’s transition from pet to creature of the wild and cranks up the dramatic tension. For instance, we the reader understand why Manuel sells Buck from the ranch in California but come to understand later that Buck was more loved as a working animal with John Thornton on the trail than he ever was as a pampered pet. However, this style of narration did open up London to accusations of anthropomorphizing. Both Teddy Roosevelt and naturalist John Burroughs accused him of creating animals who were “men in fur.” London answered that The Call of the Wild and White Fang were instead “a protest against the ‘humanizing’ of animals,” and that they were motivated not by reasoning but by “instinct, sensation, and emotion, and by simple reasoning.”

According to one interpretation, the characters can be seen as political figures, a la Orwell’s Animal Farm. In that reading, the man in the red sweater is a stand-in for the USSR. It certainly succeeded as a non-political tale. None of the readers around the table were particularly struck by the political interpretation, we pick up on the influence of Darwin’s Origin of the Species (one of two books autodidact London took into the the Yukon, the other being Milton’s Paradise Lost). The brutal survival-of-the fittest ethos is vividly captured in scenes in which Buck fights both men and beasts making us wonder if the novel would be as heavily marketed to children if it were released today. Having read Hemingway’s A Farewell to Arms in November, we compared the two self-consciously masculine writers. London won on all counts: description, emotion and heart. END_OF_DOCUMENT_TOKEN_TO_BE_REPLACED

The Brown Bagger’s discussed Academy-Award winning author Graham Moore’s second novel, The Last Days of Night on November 16. The historical-fiction centered on the light bulb rivalry between inventors George Westinghouse and Thomas Edison. Of course Nikola Tesla had a role in this war of currents, but the novel followed Westinghouse’s young lawyer, Paul Cravath, and his quest to win an impossible lawsuit against Thomas Edison.

Both Westinghouse and Edison wanted their current to provide electricity to America- Edison tried to discredit Westinghouse’s Alternating Current by saying it was dangerous, so that he could supply America with his Direct Current. However, it was proven that A/C current was safer than D/C current. The story itself followed the actual war of currents, in a more compressed time frame. The characters in the story were well-developed- Edison was portrayed as a man who was only interested in name recognition, which he achieved, even at the loss of the company he started. Westinghouse was depicted in a kinder manner, and as someone who wanted to make the best products possible. And, Tesla was portrayed as an eccentric genius who just wanted to invent and did not care about money.

Paul Cravath was fresh out of law school when he took this case, and while he was smart, he was inexperienced and made some mistakes. However, by taking Westinghouse as a client he was introduced to the more glamorous side of New York and meets Agnes Huntington, an opera singer with a mysterious past. Cravath had to take continually bigger risks throughout the lawsuit but doing so meant that he would change as a person, and possibly lose those that he cared about.

The Brown Baggers overwhelmingly loved this novel! Many felt that the book provided a great background on the history of light bulbs and the nuances of patents. The quotes at the beginning of each chapter made the content even more relevant for today’s world and most agreed that the writing was very descriptive- almost as if it were a screenplay. There was a lot of legalese in the book, but not so much that it was hard to follow. Many felt that the novel was both emotional and fascinating- it was a page turner!

Interview with the author:
NPR

Books mentioned during the discussion:
The Riverkeepers by John Cronin and Robert F. Kennedy
Thomas A. Edison, Young Inventor by Sue Guthridge

The Brown Baggers will meet again on December 21 at 12pm to select titles for the next 12 months- bring a treat to share and participate in the *book swap (new this year) if you want!

*Book swap- bring a book or two to trade- any leftover books will be donated to the Friends of the Library Booksale.

Books on Tap read A Farewell to Arms by Ernest Hemingway  at Champion Brewery on November 2. Ostensibly a novel about an American ambulance driver and English nurse who fall in love at the Italian Front during World War I, it was quickly recognized as “one of the few great war stories in American literature.” The plight of the main character, Lieutenant Frederic Henry, closely mirrors the author’s experience in Italy during the war. They both drove ambulances, served briefly (Frederic seems to fight for two days within the book), suffered severe knee injuries in a mortar attack which left the men around them dead and received Italian war medals. They then both fell in love with a nurse while recovering in Milan, but in Hemingway’s case the affection was not shared.

Not all participants had read Hemingway previously and those who had didn’t recall all the details of this book. The first thing we discussed was the tone of the novel. Like Hemingway’s other works, it is terse but in this case it is not evocative. Two of us listened to the audiobook, where the repetition wasn’t as noticeable and the rhythms of the conversations tended toward the lyrical. The realism of the book is overshadowed by the drippy dialog between Frederic and nurse Catherine (we wondered if the author was capable of writing a female character) and the lack of urgency in the interpersonal relationship. However, the scenes of the retreat and river escape aligned with our pre-conceptions of Hemingway’s style and conveyed his message about war. Some readers compared these scenes to The Revenant book and movie and An Occurrence at Owl Creek Bridge.

There is room for ambiguity in the realistic description of war. No one seems to care about the cause of the conflict and the Italians differ in opinion on tactics and leadership. The unceasing rain, while historically accurate, also emphasizes the long slog characteristic of this war and the ultimate interiority of the main characters, cloistered in hotels and hospitals. Catherine claims that the war will never end and their unborn child will become a general. Frederic and an Italian priest contemplate the end, saying “It is in defeat that we become Christian. . . I don’t mean technically Christian. I mean like our Lord. . . We are all gentler now because we are beaten.” Through unimaginable bloodshed, we earn acceptance and humility.

Mysteries abound in this novel. Why was Frederic in Italy before the war? Was he really studying architecture? Where did they find the money to stay in Switzerland for months? Why were they estranged from both families? Perhaps the biggest mystery is Catherine. Does she truly love Frederic or is this a relationship of convenience, swept up in the war. How could a women who worked a dangerous, arduous job, an atheist who lived independently from her family be as clingy and afraid of upsetting her partner as Catherine was? Her obsession with thinness made us wonder if Hemingway or Frederic were the misogynist.

The ending was so abrupt that some audiobook listeners weren’t sure that the novel had ended. However, another reader pointed out that the ending is fitting – this self-absorbed couple doesn’t have a future and may not have been in love. One astute reader shared her favorite alternate ending, available in some paperback editions: “When I woke the sun was coming in the open window and I smelled the spring morning after the rain and there was a moment, probably it was only a second, before I began to realize what it was that had happened. And then I knew that it was all gone now and that it would not be that way any more.”

More Information:
About the author
About the book
Battle of Caporetto map and more on the Italian Front.
Other works
WWI reading list
Confidential to Will: Is this it?