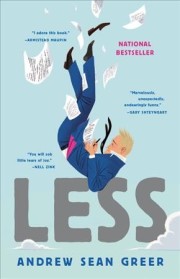 Each year, the Pulitzer Prize Board recognizes the best and brightest in writing, drama, and music. The winners of the 102nd Pulitzer Prize were officially announced last week.

You can check out any of this year’s prize-winning titles from the JMRL collection:

Fiction: Less by Andrew Sean Greer – Receiving an invitation to his ex-boyfriend’s wedding, Arthur, a failed novelist on the eve of his 50th birthday, embarks on an international journey that finds him falling in love, risking his life, reinventing himself and making connections with the past.

History: The Gulf: The Making of an American Sea by Jack E. Davis – A comprehensive history of the Gulf of Mexico and its identity as a region marked by hurricanes, oil fields, and debates about population growth and the environment demonstrates how its picturesque ecosystems have inspired and reflected key historical events.

Biography: Prairie Fires: The American Dreams of Laura Ingalls Wilder by Caroline Fraser – A comprehensive historical portrait of Laura Ingalls Wilder draws on unpublished manuscripts, letters, diaries, and official records to fill in the gaps in Wilder’s official story, sharing lesser-known details about her pioneer experiences while challenging popular misconceptions about how her books were ghostwritten.

Nonfiction: Locking Up Our Own: Crime & Punishment in Black America by James Forman Jr. – A consequential argument about race, crime and law in today’s America by a Yale legal scholar and former public defender examines the urgent debates surrounding the criminal justice system and its activities involving mass incarceration, aggressive police tactics and their impact on at-risk people of color and beleaguered law-enforcement officers.

Poetry: Half-Light: Collected Poems 1965-2016 by Frank Bidart – Gathered together, the poems of Frank Bidart perform one of the most remarkable transmutations of the body into language in contemporary literature. His pages represent the human voice in all its extreme registers, whether it’s that of the child-murderer Herbert White, the obsessive anorexic Ellen West, the tormented genius Vaslav Nijinsky, or the poet’s own.