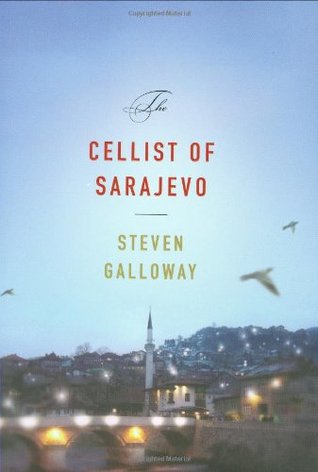 Books on Tap read The Cellist of Sarajevo  by Steven Galloway at  Champion Brewery on April 6. The novel follows three characters as they make choices while living in Sarajevo while the city was under siege from April 1992 to February 1996 during the Bosnian War. The titular cellist and one of those main characters are based on real people. Vedran Smailovic did play for 22 days to publicly protest the bombing of 22 civilians in a breadline. However, The Cellist of Sarajevo angered him. Galloway was inspired to create the character Arrow after reading an 1992 AP article about a 20 year-old female sniper.   In the novel, Arrow tries to distance herself from the murders she commits, while preventing a sniper from the other side from killing the cellist while he plays for  22 days at the site of the bread line bombing. Elsewhere in the city, Kenan risks his life to traverse the city to gather water for his young family and his cantankerous neighbor.  Dragan, who has sent his wife and son to live a few hours away in Italy, still works at a bakery, but has to live with his sister because his apartment was destroyed by a bomb. While most of the novel revolves around the interior choices the characters make to maintain their humanity against the backdrop of the destruction of their civilized city, the physical risks they take on their journeys throughout the city maintain narrative tension.

To begin the conversation, we tried to remember what we knew about the Bosnian war and the limits the UN faced in guarding civilians. We also wondered if readers in Galloway’s native Canada would be more familiar with the history because Canadian troops and leaders were heavily involved in the UN Protection Force charged with peacekeeping in the area. Galloway intentionally does not provide the reader with extensive background information about the Siege or his characters in order to expose the survival conditions that existed in the city and the basic humanness of each person in the book.

The destroyed buildings and infrastructure and the murders that the main characters witness while on the streets of Sarajevo underpin the randomness of war and the seeming powerlessness of humans. However, we discussed the choices that each of them make to reaffirm their humanity. Dragan both chooses to see the city he remembers and its current bombed-out iteration. He chooses both to be annoyed by his brother-in-law and to risk his life to ensure that a stranger doesn’t die alone in the street. Kenan chooses to gather extra water for his elderly neighbor and not to go into the hills like his friend. Arrow chooses to kill the sniper trained on the cellist, despite her initial hesitation and also chooses not to kill the elderly man her new commander demands she shoot. That man clearly has ties to Arrow’s enemies in the hills but she knows that the killing has to stop with someone and she would rather die than continue to be a machine of death. END_OF_DOCUMENT_TOKEN_TO_BE_REPLACED