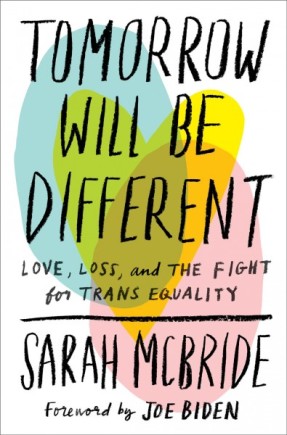 The LGBTQ Book club met on August 28 to discuss Tomorrow Will Be Different, Sarah McBride’s memoir about coming out trans in college, advocating for trans rights in Delaware, speaking at the Democratic National convention, finding love and losing it to cancer and advocating for trans rights on a national scale. It’s a lot to pack in to 25  years of living and a bit too much to pack into a book of this size.

About half of the group were familiar with trans people and rights before this meeting, although none of us knew much about McBride herself. One reader said that although he hadn’t been familiar, McBride’s authenticity elicited his empathy and that he has a better understanding of trans lives. Another reader had the opposite reaction, wanting more of McBride’s life story and less of the minutiae of her political life. We all agreed that while she does acknowledge her privilege (race, class, parental support), she doesn’t fully explore that but she is taking full advantage of the slide that has been greased for her.

We explored the ways in which terms such as trans, bigot, and gay have evolved and the intersectionality of identities. One reader spoke of the conflict of including  lesbians and bisexuals in the now-LGBT community. We also touched on the work of trans women in the Stonewall riots.

Ultimately we agreed that the 28-year-old author has already led a remarkable life that is well documented in this book but we were left wanting to know more about the person and less about the potential political candidate.

Recommendation:
As One opera

Next meeting:
The LGBTQ Book Club is going on hiatus this fall. Look for more information on jmrl.org in the spring.