It’s a wonderful day for a poem in your pocket.

Today marks the sixth consecutive year that JMRL will be bringing Poem in Your Pocket Day to the greater Charlottesville area. All of the JMRL branches will be handing out tiny poems that have been rolled into scrolls and wrapped with a ribbon. Thousands of people will unravel these scrolls and take a moment to experience poetry.

It all began in 2009 when Wendy Saz, branch manager of Crozet Library, discovered Poem in Your Pocket Day on the Academy of American Poets website. She thought it would be a great idea to bring this annual celebration of poetry to the JMRL area, so she spearheaded her own initiative.

First, permission to reproduce and distribute the poems must be given by the rights holders. Then, the poems are typed up, formatted and printed. The poems are rolled into scrolls with the help of library staff, UVa students, the Senior Center, and other volunteers.

In the beginning, Saz would take on the responsibilities of getting the permissions, printing the poems, and organizing a street team to distribute them on the Charlottesville Downtown Mall. After a couple of years, however, a formal committee was put together at JMRL to organize Poem in Your Pocket Day each year.

“It’s evolved because of the community response to the project,” Saz said.

The 2013 Poem in Your Pocket Day street team gets ready for a day of distributing poems.

The first time the street team handed out poems, Saz was surprised by the overwhelmingly positive response from people after they read their poems.

“A lot of people felt a personal connection somehow to the poem, which was surprising to me,” she said. “That was something that I did not expect at all.”

John LaPanta, owner of Bagby’s Gourmet Sandwiches on the Downtown Mall, once received a Shakespearean sonnet about friendship and expressed to Saz that he felt a connection with that particular poem because that weekend he was going to see an estranged friend. After that, LaPanta decided to start putting poem scrolls into all of the bagged lunches served at Bagby’s on Poem in Your Pocket Day.

Saz said that many people have taken a poem and returned to tell the street team members that the poem they picked had a connection to something happening in their life, or that it inspired them, or reminded them of someone.

“It seems like sometimes the poems just fall into the right hands at the right time,” Saz said. “I think it’s between the poet and the reader, and all we’re doing is facilitating the connection between the two.”

As to why the poems are rolled into scrolls, Saz said, “I didn’t want to just hand out sheets of paper, because to me that’s not very aesthetically pleasing, and I thought if we approached people with sheets of paper they would just think that we’re advertising something.”

Saz said that the JMRL Poem in Your Pocket Day committee considering doing away with rolling the poems because of the added cost and effort it takes to put together approximately 8,000 scrolls each year. After talking with members of the community, however, they realized that the scrolls were an indispensable part of the magic.

“There’s something about that little package that’s special; it’s like a little gift of some sort,” Saz said. “I think the scrolls with the ribbon are attractive and they make it like a fortune cookie, because people don’t know what they’re going to get. Sometimes they’ll pick it by the color of the ribbon and sometimes it’s just random, and then they open the scroll and the actual value is in the poem itself.” 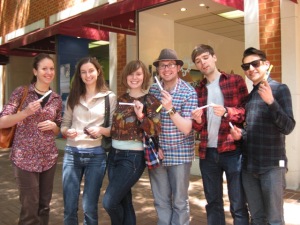 A group poses with their poem scrolls on the Charlottesville Downtown Mall.

The poems are very valuable, indeed, when it comes to creating a dialogue within the community.

Saz was once told by someone who received a poem that afterwards they went to Revolutionary Soup for lunch and saw that many of the people there had poems as well. Soon the restaurant was buzzing with talk of the poems and people began sharing them with each other.

“This group of strangers became a group of people discussing poetry together,” Saz said, “and there was this impromptu dialogue between strangers about these little pieces of literature.”

This anecdote perfectly embodies the main concept behind Poem in Your Pocket Day: to engage the community in the shared experience of receiving a poem at random and then sharing and discussing it with other people.

Today, two street teams will hand out poems on the Charlottesville Downtown Mall and Albemarle Square Shopping Center. Scrolls can be picked up from any JMRL location, as well as UVa libraries, UVa and Martha Jefferson hospitals, the Senior Center, ACAC in Albemarle Square, and several businesses along the Downtown Mall.

Which poem will you unwrap?