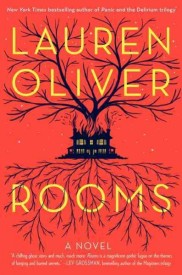 With Halloween approaching, you may be looking for something to spooky to read in the coming weeks. What better way to get into the Halloween spirit than to read about apparitions appearing from the unknown?

Here are a few ghastly ghost stories that you can find in the JMRL catalog:

Rooms by Lauren Oliver – After Richard Walker dies, his estranged family arrives at his estate for their inheritance, while long-dead former residents bound to the house observe the family and reminisce about their past lives, until the two worlds collide.

A Sudden Light by Garth Stein – A 14-year-old boy’s efforts to save his parents’ troubled marriage and uphold his dementia-afflicted grandfather’s final wishes are shaped by a ghost who cannot rest until past debts are paid.

Snowblind by Christopher Golden – The small New England town of Coventry is haunted by its memories of a deadly winter in which loved ones were lost, families torn apart, and a town buried in a terrible blizzard. Now, twelve years later, the people plagued by their memories of that storm are haunted once again as a new storm approaches, promising to wreak new havoc.

The Boy Who Drew Monsters by Keith Donohue– Developing agoraphobia after a near-drowning incident, a 10-year-old boy draws increasingly disturbing pictures of monsters while his parents search for answers about strange noises coming from the nearby ocean at night.

Loving Day by Mat Johnson – Racially-mixed Warren Duffy, returning to America to claim a mansion in Philadelphia left to him by his father, encounters his daughter and they try to forge a life for themselves in a haunted house as members of a utopian mixed-race cult.

Bliss House by Laura Benedict – Looking for a fresh start after the death of her husband in a mysterious accident, Rainey Bliss Adams and her teenage daughter move into the old, historic family mansion rumored to have been plagued by strange occurrences, secrets and disappearances.

The Bookman’s Tale: A Novel of Obsession by Charles C. Lovett – Relocating to the English countryside after the death of his wife, antiquarian book enthusiast Peter Byerly discovers an 18th-century study of Shakespeare forgeries that contains a Victorian portrait strongly resembling his late wife, a finding that sparks an obsessive search through the bard’s historical period.